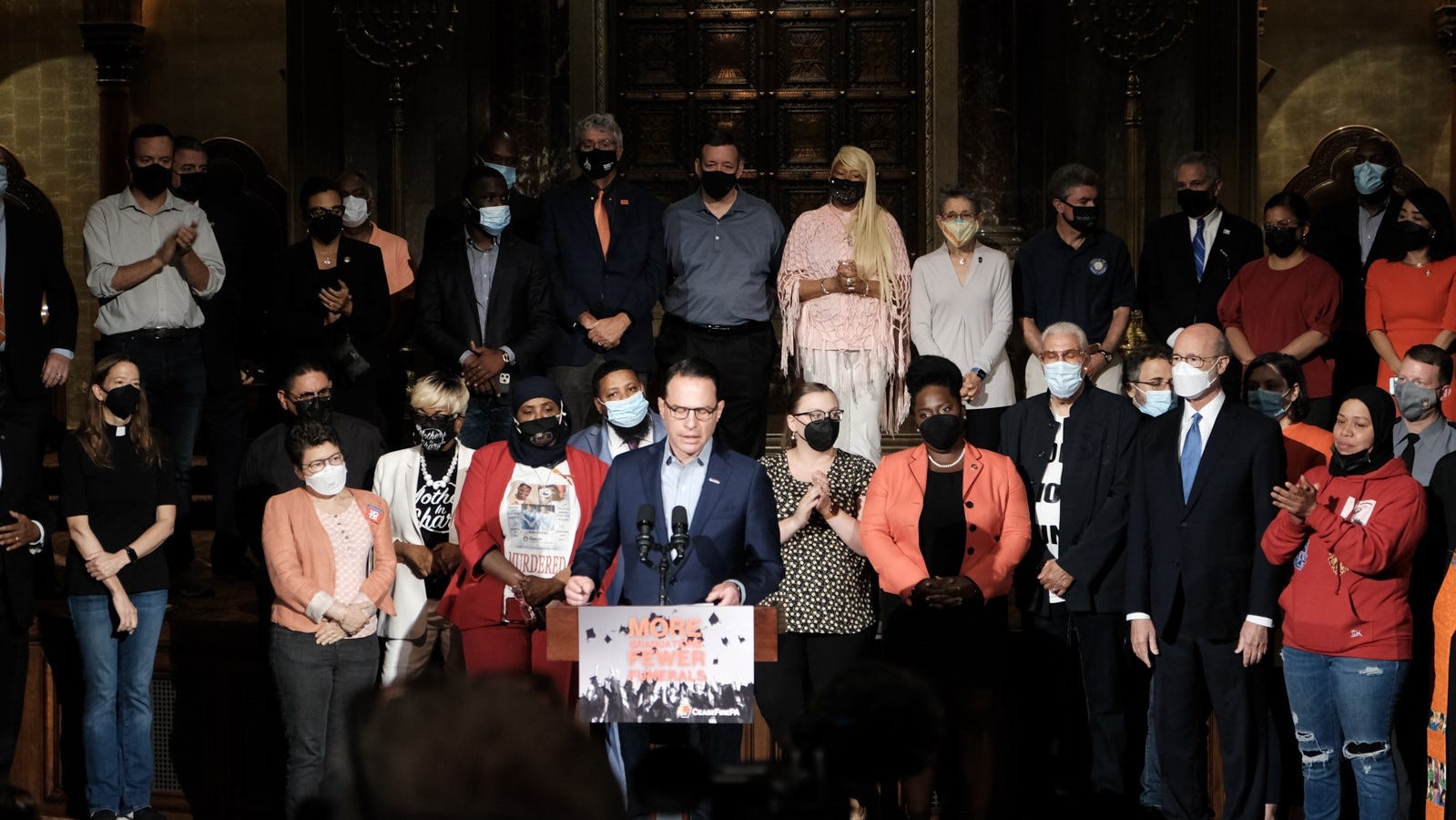 PHILADELPHIA (KYW Newsradio) — As the nation comes to terms with the latest mass shooting, one in which 19 schoolchildren and two teachers were killed in Uvalde, Texas, Pa. Governor Tom Wolf and Attorney General Josh Shapiro joined Philadelphia’s faith leaders , community activists, students and legislators. at Temple Rodeph Shalom in Poplar for an emotional rally for policy changes to reduce gun violence.

Many inside the temple on Friday showed pictures of children they had lost to gun violence, and joined in a vehement chant of “Enough is enough!”

Speeches by heads of government on Friday echoed their demand.

“Too many communities here and across the country have experienced the terror of a mass shooting, and too many communities face gun violence every day that may not make national headlines, but still leaves the fear, grief and grief in their wake,” Wolf said. to audiences of different faiths.

“Gun violence has become entrenched in our country, and the fact that our lawmakers at the state and national levels seem to agree with it is the greatest tragedy of all.”

Shapiro said last year 134 children were killed statewide by firearms, 113 of whom were victims of homicide.


Many recent shootings in Philadelphia have occurred on or near school grounds during the day, including the shooting of three teenagers this week outside a Nicetown elementary school just after the dismissal bells rang.

“I’m heartbroken. I’m angry,” Wolf said. “But I refuse to give up on asking our legislators to enact common sense legislation that protects Pennsylvanians.”

“Guns kill more children in Pennsylvania than anything else because too many lawmakers have decided it must be their fate,” CeaseFirePA executive director Adam Garber said, reflecting the governor’s call.

“It’s not a law of nature, it’s the law of man, and that means we can change it, but only if we refuse to accept less from every elected official in Pennsylvania…we won’t We won’t stop until everyone can live without gun violence.”

State Senator Amanda Cappelletti, D-Norristown, said before the last session there was a moment of silence for the victims of Uvalde. She believed they deserved this moment, but she decided to leave, and it wasn’t out of disrespect,

“I left the ground because I will no longer participate in a masquerade and stand in a moment of silence without action!” exclaimed Cappelletti.

Shapiro spoke about elected officials’ inaction and called for more pieces of legislation to be passed.

“We need to close the phantom gun loophole in Pennsylvania. It’s the weapon of choice for criminals,” Shapiro said.

“We need universal background checks because surely we can all agree that those who are criminals should not be able to get their hands on guns. We can certainly agree on that.

Several organizations advocated for gun control legislation, but the most moving call for change came from children in attendance who said they felt unsafe.

“Teachers and students should come to school every day and not worry about their safety,” said a sixth-grade student. “We are scared, frustrated and exhausted. We want to live our lives and learn and be children.”

Advocates are seeking passage of assault weapons ban bills, creating extreme risk protection orders to temporarily keep firearms out of the hands of those at risk of creating violence, requiring safe storage of firearms in homes and empowering local governments in various ways to protect their communities.