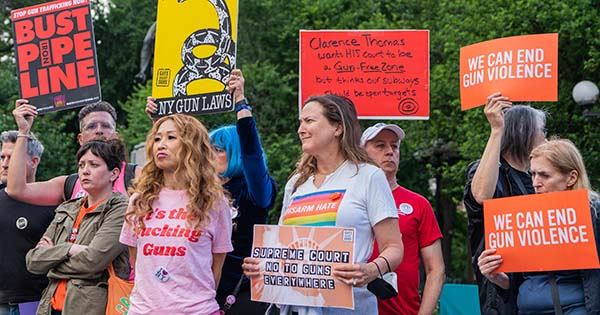 Last month, the federal government passed the first gun safety law in decades, the Bipartisan Safer Communities Actwhile at the same time the Supreme Court declared a constitutional right to bear arms in public. So it’s important to assess where this country stands on gun policy after these two seemingly contrasting and momentous events. Their impact, or lack thereof, is even more pressing to consider in light of another police shoot unarmed black manJayland Walker – shot more than 60 times no less – in Ohio on June 27 and a bloody July 4 holiday weekend that included another mass shootingin Highland Park, Illinois, which left at least 7 dead and at least 46 injured.

The Safer Communities Act is rightly hailed as a break from the deadlock in Congress, achieving progress that could yield much-needed benefits. For example, the law narrows the so-called “boyfriend loophole” by including certain romantic and intimate relationships in the ban on access to firearms for those convicted of domestic violence offenses. It also aims to close the “gun show loophole” by expanding the definition of sellers who are required to conduct background checks before making gun sales. For people between the ages of 18 and 21, these background checks could include more information than before, now using mental and juvenile health records from age 16. resources that could help improve the health and lives of many people.

But this last point is a useful illustration of both the positive and negative aspects of the law. The law creates many avenues to improve mental health training and resources, including school-based services and programs to address trauma. But while funding for mental health is desperately needed, the continued push to link mental health and gun violence creates an unsupported scapegoat who blames a disease as opposed to guns and gun culture. fire spread throughout the country. Evidence shows that people with mental illnesses are no more likely to be violent than the average individual and, in fact, are more likely be victims of violence. Where the law can be most effective in addressing the link between mental health and gun violence is funding for suicide prevention services. Indeed, evidence suggests that funding for states implementing extreme risk protection orders – laws that allow guns to be taken away from those believed to be a danger to themselves or others-is more likely reduce firearm suicideswhich represent approximately 60% of deaths by firearm every year.

So while the extra resources are a boon to addressing the shortage of mental health services – and providing financial support for community-based violence prevention programs and school safety strategies is also helpful – it is unlikely that they have a significant impact on the types of mass shootings that attract much media and public attention. Our ability to predict if and when someone will act violently is incredibly small. Additionally, mass shootings only account for about 1% of gun deaths per year, although anxiety, PTSD [post-traumatic stress disorder], the fear and stress they generate are much broader, so a narrow focus on these events alone may be misguided. Instead, we need policies that will limit access to and exposure to firearms in every possible way. Laws that make it harder to buy guns, limit the lethality of publicly available weapons such as semi-automatic rifles and high-capacity magazines, and minimize guns in public spaces would help fight against mass shootings and gun violence more generally. But the Supreme Court just made these types of laws constitutionally vulnerable.

On June 23, in New York State Rifles and Pistols Association vs. Bruen, the Supreme Court struck down a 1911 New York law — which exists in Massachusetts, four other states and the District of Columbia and covers about 80 million people — that requires those applying for a license to carry a firearm concealed in public show a specific reason they have to. The Court ruled that the state’s attempt to limit (not eliminate) the number of firearms in public interfered with the fundamental right to bear arms in public for self-defense, extending the court’s earlier ruling. Court in District of Columbia v. Heller declaring an individual right to have a handgun in the home for self-defense. Equally important, the Court ruled that gun restrictions are only valid if they have a historical analog that the government can point to from the late 18th century to the mid-19th century. This makes it much more difficult for state and local authorities to downplay guns in public. And with more guns in public and growing fear due to rising rates of gun violence, the move could lead to new levels of vigilance already seen in the world. Kyle Rittenhouse Trial. [Rittenhouse is the 18-year-old white man acquitted on all charges over the shootings of three white men following a night of racial unrest in Kenosha, Wisc., in August 2020.]

This creates a threat for anyone exposed to a heavy presence of guns, but it’s especially troubling for people of color, and black men in particular. Research shows black faces and bodies trigger criminal thoughts, just like thinking about crime can trigger thoughts in black people. We also know that black men are often seen as bigger and stronger than themand young black men are often presumed to be older and more physically threatening. We have seen devastating numbers of black men and boys shot by police while legally possessing a gun (Philando Castile), holding a toy gun (Tamir rice), or holding an air pistol that has been for sale inside a store (John Crawford III). As the Supreme Court opens the floodgates to firearms in public, stereotypes and biases will inevitably be used to determine who belongs to the court’s favorite rhetorical group, the “law-abiding citizen.”

The Safe Communities Act can have a tangible impact on gun violence and, at the very least, puts significant resources into areas that need them. But passing a law puts the policy on paper. Implementation and enforcement put the policy into action. Ultimately, the Supreme Court’s decision and its test based on history and tradition for the validity of any future gun law may be what prevents this legislation and any other gun policy. to remain intact and mitigate the damage caused by guns that we are all becoming too accustomed to witnessing.

Michael Ulrich is an assistant professor in the School of Public Health and the School of Law in health law, ethics and human rights. He can be contacted at [email protected]

“POV” is an opinion page that provides timely feedback from students, faculty, and staff on a variety of issues: on-campus, local, state, national, or international. Anyone interested in submitting an article, which should be approximately 700 words, should contact John O’Rourke at [email protected] UB today reserves the right to reject or modify submissions. The opinions expressed are solely those of the author and are not intended to represent the views of Boston University.