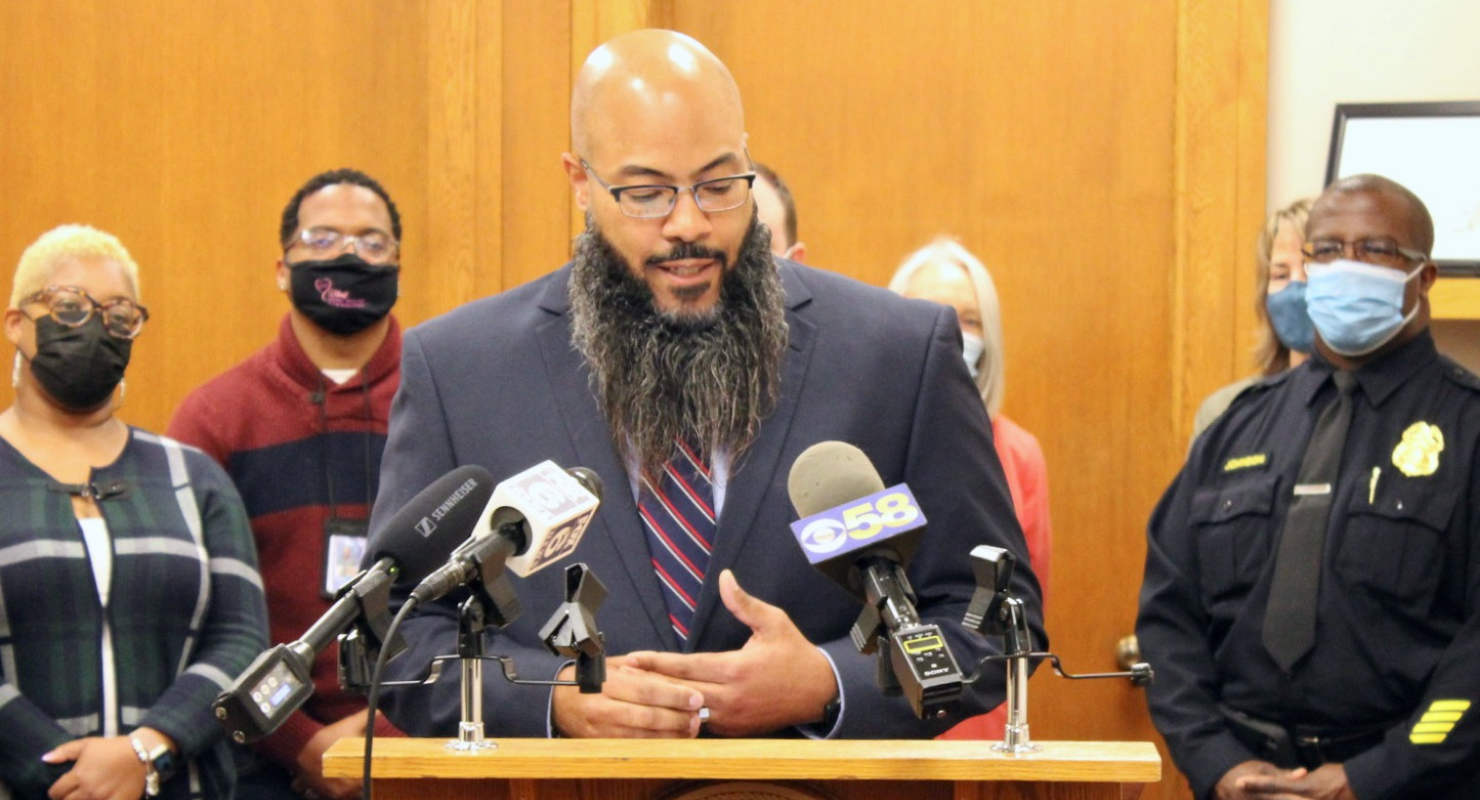 Reverend Will Davis speaks at a press conference on Wednesday where Mayor Tom Barrett signed the resolution to make Milwaukee part of the Gun Safety Consortium. (Photo by Matt Martinez)

Since he began his ministry, located at 2700 N. 54e St., he saw the pain and loss in his congregation. He consoled mothers whose sons attempted suicide with unsecured weapons. He organized services for young people who lost their lives due to gun violence.

He’s tired and he’s had enough.

He hopes the first step in the process will be for Milwaukee to join the Gun Safety Consortium, which includes a group of towns and villages across the country that are committing funds to research new gun safety measures. The group aims to bring together public funders to support research and procurement of new gun safety technologies.

The Common Council voted Nov. 2 to have Milwaukee join the Gun Safety Consortium, and Mayor Tom Barrett signed the resolution on Wednesday.

Davis is a member of Common Ground, a citizens’ group based in Southeastern Wisconsin that works to address social issues, such as gun violence. The gun safety group’s campaign, Don’t Stand By, brings together citizens, clergy and law enforcement to advocate for policies. 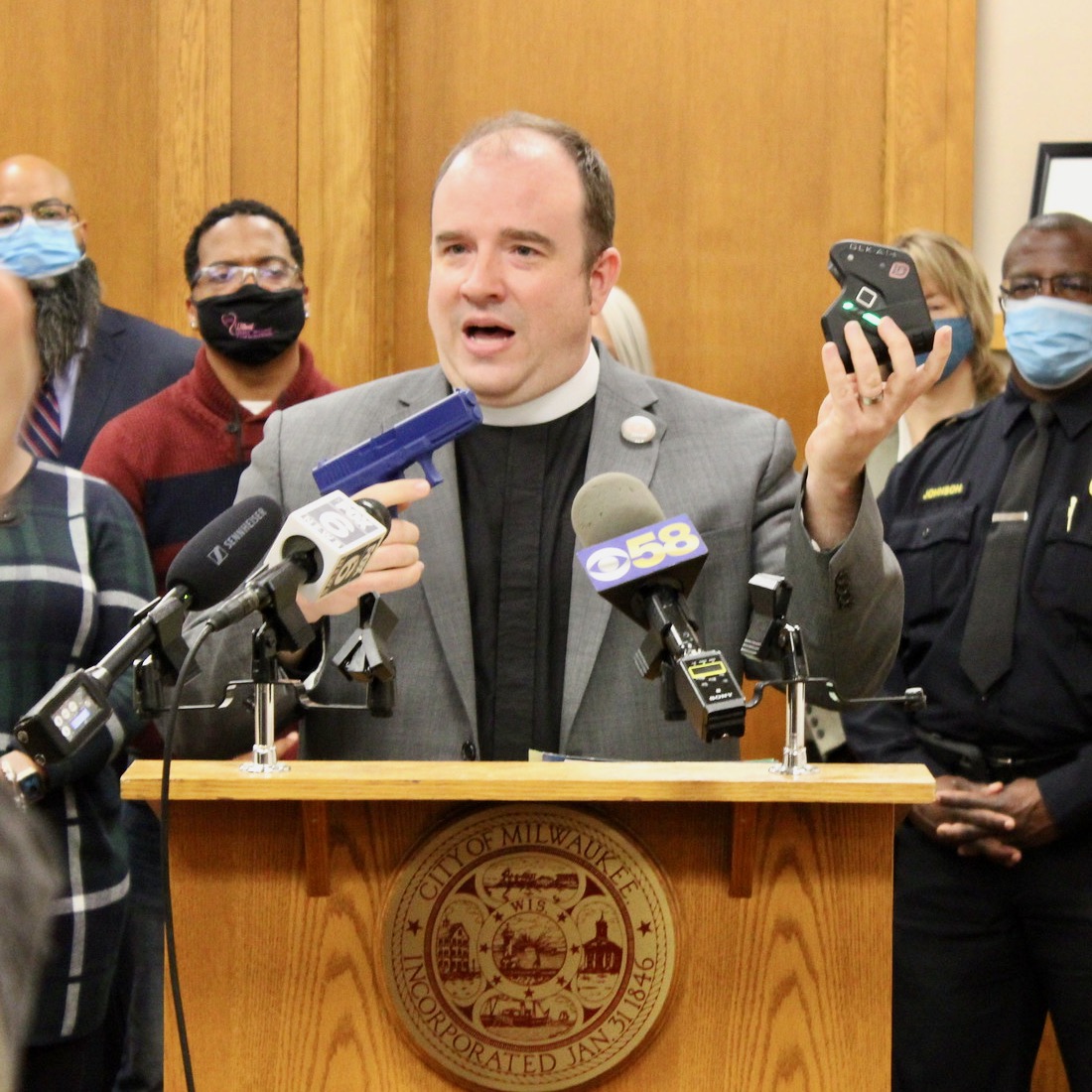 Reverend Robert Ater is demonstrating smart weapons technology that will be tested by the Milwaukee Police Department at a press conference on Wednesday. (Photo by Matt Martinez)

Members of the Milwaukee Police Department will begin testing 18 products that could help mitigate gun violence. Laura Vuchetich, East Siders member for Common Ground, said the immediate goal is to identify five or six of these products to use.

The effort could result in the conversion of normal firearms to smart weapons, that is, weapons that require user ID to fire; cases that make the handling of weapons safer; geolocation devices; and anti-theft measures.

Although product testing for the new technologies will begin in December, it may take some time to see the effects. Rev. Robert Ater, associate pastor of Immanuel Presbyterian Church and a member of Common Ground, said Milwaukee will participate in the program for at least two years, based on its $ 10,000 contribution towards consortium membership.

Once the products have been tested, work begins to integrate them into the community. The effort is easier said than done: Many products cost over $ 100 on average, making them expensive for many gun owners. Cost considerations will make distributing these products more difficult than it is currently for less expensive efforts, like the pistol locks distributed by the Office of Violence Prevention, Vuchetich said.

Common Ground members will also be responsible for engaging the community. Regarding convincing them of the importance, Davis said the plan is to let the stories of those affected speak for themselves.

â€œIt’s the power of history,â€ Davis said. â€œWe share the stories of families who have been hurt by senseless violence, by suicide. “

The stories also help keep those working on the project grounded.

“It depends on where we’re from, but we all have some kind of story that motivates us to find a solution and keep our eyes on that long horizon,” Vuchetich said.

Ater said the initiative goes beyond violent crime. Suicide accounted for about 70% of gun deaths in Wisconsin in 2019, he said. The initiative also hopes to reduce accidental gun deaths, especially among young children.

It can be difficult to bring so much attention to suicide gun deaths, Vuchetich said, because they are often less covered than violent crime.

â€œSuicides are silent,â€ Vuchetich said. â€œPeople don’t know them. It is not death or violence that creates fear.

The efforts could be critical, given the way guns are handled nationally. Less than 50% of guns are properly secured, Ater said. These efforts hope to find common ground between security advocates and the everyday gun owner.

â€œIt’s a matter of life and death that we hear about every day,â€ Ater said.