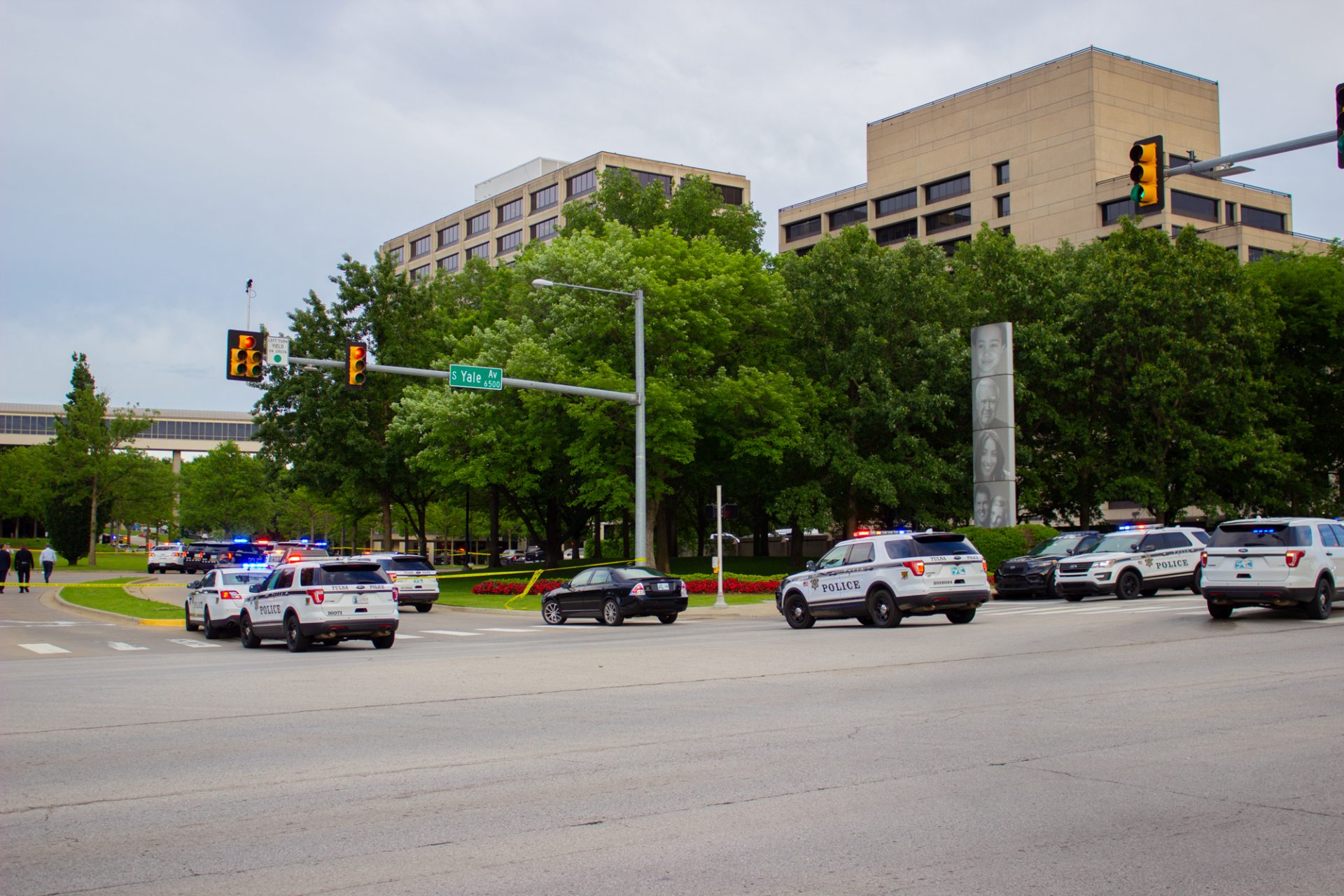 On the afternoon of June 1, a man walked into a local gun store and purchased an AR-type rifle. A few hours later, he used this rifle and a handgun he bought two days before to kill four people at a Tulsa medical center before turning the gun on himself.

It happened just a week after an 18-year-old bought an AR style rifle and a few days later massacred 19 children and 2 teachers in Uvalde, Texas.

And it happened just over a week after an 18-year-old boy, who had previously threatened with murder-suicide at his high school, bought a semi-automatic rifle and killed 10 people in Buffalo.

In Oklahoma, someone is killed with a gun every 12 hoursand the state ranks in from the country High ten for the weakest gun regulations.

As mass shootings continue to make headlines across the country, gun reform advocates in Oklahoma have a long and uncertain road ahead of them.

How did Oklahoma’s gun policies get to where they are today?

The state’s Republican-dominated legislature passed a series of bills over the past decade to deregulate gun restrictions and strengthen ownership and use rights:

One congresswoman who has been involved in gun reform conversations in Oklahoma throughout her 12-year tenure is House Minority Leader Emily Virgin, D-Norman. Virgin said in recent years it has seen a dramatic shift in the legislature towards “a much more extreme stance” on gun access.

“What I saw was that after President Obama was elected, this message from really national Republicans and the NRA became that the Democrats were going to take your guns away from you,” Virgin said. “And of course you’ve seen it in the sale of guns and ammunition, and you’ve seen it, of course, with Capitol Laws.”

Virgin said the consensus on the gun policy of the Norman Republicans she represents is mixed.

“Some of my constituents wouldn’t like me to support anything related to gun safety,” Virgin said. “But I hear, however, from Republicans in my district and other districts who are really fed up with how Republicans in Oklahoma are getting more and more extreme on gun policy. … That’s the most common thing I hear from Republicans is that they support the Second Amendment. They’re gun owners, but that’s gone too far.

An organization that served as driving force behind much of the state’s recent gun deregulation is the Oklahoma Second Amendment Association (OK2A). He describes himself as the state’s “leading defender of Second Amendment rights.” Virgin said the lobby group had a lingering influence on the legislature.

According his websitefrom 2015 to 2021, of the 37 pro-gun bills OK2A has helped pass, the group has requested and written text for 25 of them.

And OK2A chairman Don Spencer echoed a similar sentiment from Virgin: When a Democrat is in the White House, people buy more guns.

“With the threat of [assault weapons] taken away, when Obama went there in 2008, [sales] just completely skyrocketed,” Spencer said. “So now the number of people who own them – and it’s even increasing even more because Biden claims to be taking them away – and so on [sales are] will continue to rise even higher.

On the issue of banning assault weapons like AR-15s, Spencer said that this type of weapon is needed for situations like home invasions, but also for much larger adversaries – like the government. American.

“That’s why you need an AR-15. (…) Worst case scenario of a tyrannical government coming to take away this weapon,” Spencer said. “You need this weapon to stop them.”

Spencer said that in the case of the Tulsa shooting — where Michael Louis, 45, used an AR-style handgun and rifle — he thinks greater facility security, rather than regulations on the firearms, could have stopped the attack. He also said one point was omitted from the conversation about the Tulsa shooting:

What do we know about gun ownership and gun violence?

Possession of weapons has greatly increased in the last few years. In 2011, Americans owned guns at a rate of 88 guns for every 100 people. That number is now 120.5 guns per 100 people.

When it comes to gun deaths, in 2020 alone, more than 45,000 people in the United States have died by gunshot – both homicide and suicide – more than any other year on record. This represents a 43% increase in firearm deaths from 2010.

Data collected by Columbia University research professor Louis Klarevas for his 2016 book Rampager Nation, show that compared to the 10-year period before the 1994 federal assault weapons ban took effect, mass shootings (defined as an incident with six or more deaths) fell by 37% . After the ban expired in 2004, mass shootings increased by more than 180%. Deaths jumped nearly 240%.

As for the relationship between firearm ownership and firearm deaths, a 2009 study published in the National Library of Medicine found that people with a gun were about 4.5 times more likely to be shot in an assault than people without a gun. In assaults where the victim had at least a chance to resist, the likelihood of the victim being shot increased to about 5.5 times.

What about gun reform supporters in a state like Oklahoma?

National opinion on gun policy is divided along party lines. A recent ABC News/Ipsos Poll taken after the Tulsa shooting found that 90% of Democrats want to prioritize gun control laws. That number drops to around 40% of Republicans.

In Oklahoma, Democrats have repeatedly clashed with a pro-gun majority legislature. A day after the Tulsa shooting, the Oklahoma House Democratic Caucus called a press conference at which they unveiled the Anti-Violence and Extremism Act (SAVE).

The measure seeks to repeal several gun laws, including carrying without a license, the anti-red flag law and the law allowing concealed carry in parks and zoos. It would also introduce new laws, such as establishing a waiting period when purchasing firearms, raising the minimum age to purchase an assault weapon, and creating a statewide red flag law.

“What happened in Tulsa is absolutely preventable,” Rep. Monroe Nichols, D-Tulsa, said at the conference. “It is unfortunate that this legislature is now focused on preventing mass shootings in the state of Oklahoma. Three years ago I led [the effort] repeal transport without a license, and we collected over 30,000 signatures in 11 days. I truly believe that the State of Oklahoma believes in it.

Kay Malan, a volunteer with the Oklahoma chapter of the gun reform advocacy group Moms demand actionsaid pushing through gun control measures in the historically pro-gun state of Oklahoma is a difficult task.

“Unfortunately, we really have an uphill battle in Oklahoma because our legislators tend to listen to armed extremists rather than responsible gun owners,” Malan said.

Moms Demand Action is pushing for measures like red flag laws, universal background checks, and raising the minimum age to buy a gun. While gun reform is a tough sell in states like Oklahoma, she said she saw nearly 2,000 locals sign up to volunteer in the wake of the Tulsa shooting.

“There is no single law that will stop gun violence,” Malan said. “So we need a multifaceted approach. We need more responsible people to put politics and opinions aside and work together to save lives as a moral imperative.

The word Malan uses to describe the group’s work is ‘relentless’. And as more and more mass shootings continue to push the conversation about gun politics into the air of the times, Malan said she feels the urgency to keep moving forward, regardless of the setback. .

“Sometimes the work can get daunting,” Malan said. “However… If we remain silent, if we become discouraged and stop talking, stop acting and stop moving our feet, who is going to do the work? Who will speak? (…) We must continue to be loud to attract attention, because at the moment the loudest voices of a minority group come from the extremists. We must be stronger.

Editor’s note: This article was updated June 10 at 9:55 a.m. to correct a statement from “carry without permission” to “carry concealed.”