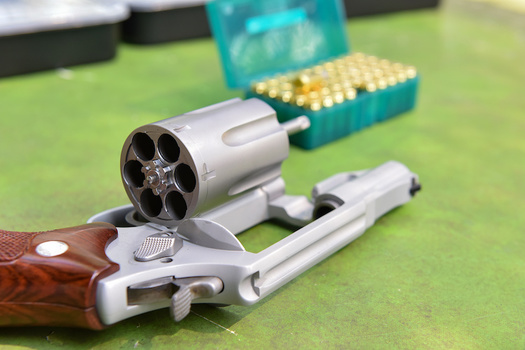 Sen. Mitch McConnell, R-Ky., the Minority Leader, said Tuesday he would support a bill that follows the agreement.

Kym Craven, executive director of the National Association of Women Law Enforcement Executives, said her group advocates measures to prevent people with a history of violence or domestic violence from getting guns.

“We have a lot of research at our fingertips to reflect on and gather,” Craven said. “And create programs and strategies to reduce the number of gun deaths that occur in our country.”

Last week, U.S. House lawmakers passed the Protecting Our Children Act, to raise the purchase age for semi-automatic rifles from 18 to 21 and create federal laws against gun trafficking, among other reforms. Only one Kentucky member of the chamber, Rep. John Yarmuth, D-Louisville, voted to approve the bill. In 2020, the Commonwealth had the 13th highest gun death rate in the country, according to the Giffords Law Center.

Craven pointed out that several states have struck a balance between responsible gun ownership and policies such as implementing universal background checks and closing private sale loopholes.

Fredrick Thomas, president of the National Organization of Black Law Enforcement Executives, said that for those who have chosen to serve their community by becoming a police officer, it’s a moral issue.

“I can’t ignore underserved communities, who see loved ones turned into victims in the blink of an eye,” Thomas pointed out. “I can’t ignore the fact that federal inaction has brought us to this horrible inflection point.”

Mass shootings occurred every day in June except one, in Kentucky and more than a dozen other states, according to Gun Violence Archive.

Across the country, people continue to discuss gun violence in the wake of two major mass shootings in Texas and New York.

The conversation evokes painful memories for the communities that have lived through them in the past – and a reminder that this violence hurts a wide circle of people, including medical professionals.

Lynda Pond is president of the Oregon Nurses Association and was working at a Springfield hospital when a shooter killed two people and injured 25 at a nearby school in Eugene.

On Sunday, US senators announced they had reached bipartisan agreement on a number of gun safety laws.

Victims of the 1998 shooting at Thurston High School were brought to Pond Hospital. She spoke in Washington DC last Friday at a media event ahead of weekend March for Our Lives rallies across the country.

Pond was on duty again in 2015 when another shooter killed nine people at a community college in Roseburg. Several of the victims were transferred to his hospital.

She said she knows people who have been personally affected by gun violence, particularly during the Springfield incident, and feel the anguish whenever a shooting occurs.

“A lot of people who are victims of these traumas can’t be activists because the pain is too deep,” Pond said. “It’s all too real. So it becomes the responsibility of those of us who saw it, who weren’t immediately affected, to bring forward our experiences and experiences and share the stories.”

Pond said she hopes lawmakers can put aside their differences to ensure gun violence does not claim more victims.

“It shouldn’t be a political issue,” Pond said. “It’s a humanitarian issue.”

Disclosure: The Oregon Nurses Association (AFT Local 5905) contributes to our fund for reporting on policy and budget priorities, health issues, living wages/working families. If you would like to help support news in the public interest, click here.

West Virginians concerned about gun violence are gathering this weekend press lawmakers to pass gun safety measures in the wake of the mass shootings in Uvalde, Texas; Buffalo, New York; and elsewhere. The rally is at noon Saturday at the State Capitol.

The American House passed a bill Thursday to nationalize “red flag” laws, allowing a court to temporarily prevent someone deemed a danger to themselves or others from buying firearms.

Fred Albert, president of the American Federation of Teachers-West Virginia, said he recently spoke with Sen. Joe Manchin, DW.Va., and believes Manchin will take action on the issue.

“He’s definitely supporting doing something that’s going to help,” Albert said. “And what is that something? I guess they’re debating it right now in Congress.”

Earlier this week, the senator told CNN he would support raising the gun purchase age to 21.

Giffords Law Center declared West Virginia does not require residents to obtain a background check or permit to carry a loaded and concealed weapon in public.

As of 2020, Mountain State had the 14th highest gun death rate in the nation. Opponents of tougher gun safety laws have argued that they penalize law-abiding gun owners and fail to reduce violent crime.

Albert added that teachers, students and parents across the country are grappling with unprecedented levels of trauma and grief. But he stressed that there are evidence-based gun violence prevention practices and policies to help keep communities safe.

“We cannot continue on this path of what is happening in our schools, in our grocery stores, in our churches, in our hospitals,” Albert stressed. “Something must be done.”

A study 2019 in the Journal of Rural Health, states implementing background checks for all gun sales had 15% lower death rates than states without background check laws. It also found that state laws prohibiting those convicted of violent crimes from owning firearms meant an 18% reduction in homicides.

Disclosure: The American Federation of Teachers contributes to our fund for reports on education, health issues, living wages/working families and social justice. If you would like to help support news in the public interest, click here.

After the recent mass shooting at an elementary school in Uvalde, Texas, New Hampshire students are taking to the streets to advocate for tougher gun laws in the state.

Groups are also urging Governor Chris Sununu to veto two gun-related bills directed at his office. The State of New Hampshire, municipalities and schools would be prohibited from enforcing or cooperating with federal gun regulations unless they are also within state law.

Aarika Roy, organizer of the Nashua March for Our Lives rally and sophomore at Nashua High School North, thinks it’s time for lawmakers to take action against gun violence.

“For me personally, and just for most students in general, it’s important for us to raise the gun ownership age from 18 to 21,” Roy said. “And just to adopt stricter policies, and put in place background checks and so on.”

Saturday’s protest will begin at the Soldiers and Sailors Monument in Nashua, with a march to Greeley Park. Sen. Maggie Hassan, DN.H., Rep. Laura Telerski, D-Hillsborough, and local students will speak for remarks.

New Hampshire Rankings 42nd in the United States for the strength of the gun law, and the state sees an average of 143 gun deaths per year, according to the group Everytown for Gun Safety. Roy emphasized the importance of the issue for younger Granite Staters.

“If students as young as five are being shot at in a school, we as high school students, the next generation, can’t stand for that to happen,” Roy said. “Because if things don’t stop now, if things don’t change now, it’s going to continue.”

Democratic lawmakers on the Tribunal tried last week to pass a bill requiring background checks on all gun sales, not just those from licensed retailers, but it was blocked by Republican majorities. The Nashua rally is one of hundreds taking place this weekend across the country in the wake of the Texas shooting.