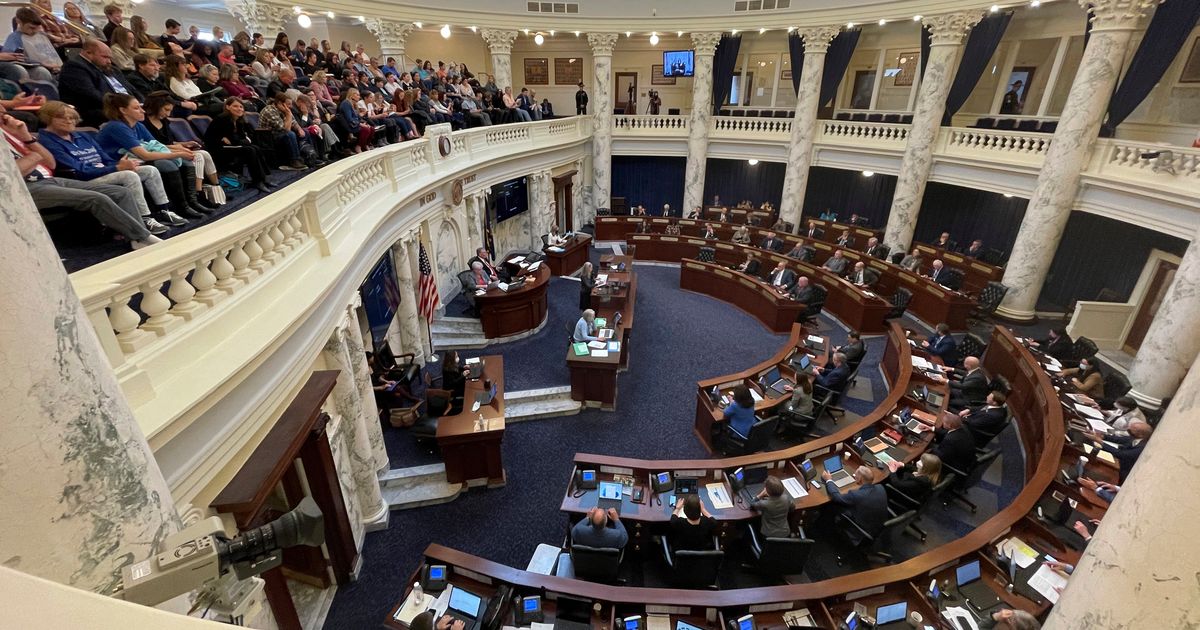 For months, high school students in Idaho worked with state lawmakers to craft a resolution on gun violence. They prepared moving testimonies about the loss of family or friends to suicide, the feelings of numbness from active fire drills, and the fears they had when loved ones with mental health issues had access to firearms. They expected to read it before a committee of legislators.

But the students never had the chance to share these stories publicly.

The students said they were frustrated and disappointed that what they considered a reasonable solution was not presented. They had spent weeks meeting with state legislators, many of whom they said were supportive and enthusiastic about the student involvement.

The draft resolution recognized the importance of the Second Amendment and the Idaho Constitution, acknowledged the impact of “preventable tragedies” and encouraged “responsible gun safety and safe storage.”

“I think for us, it’s so simple. This (resolution) literally recognizes that there are people dying that we should care about,” said Amaia Clayton, a student at Renaissance High School in Meridian. “And then it immediately becomes a political issue.”

Last fall, the student group worked on a bill that would have required a license for minors to buy guns. The goal was to slow down the process by which minors purchase a firearm, so that students in the midst of a mental health crisis could not access a firearm as easily.

Several of the students involved have taken a safety course themselves, where they were able to feel more comfortable with firearms after learning how to use them safely and gaining insight into others’ experience with guns. fire. They wanted to make sure they were educated on the issue before seeking to change the laws.

The students had contacted Senator Melissa Wintrow, D-Boise. Wintrow said when students came to see her, she took their concerns seriously. They weren’t the first students to contact her about it, she said.

“They were telling me stories about how many kids had access to guns, and they’re worried,” she said. “We owe them at least to listen.”

Wintrow suggested that the students instead work together on a resolution that would raise awareness and educate the public about the issue. The students said they believe they have a better chance of winning support for the resolution, which does not have the weight of law.

“A lot of the time reasonable conversation is stifled because of extremists saying, ‘You’re going to take our guns away from us,'” she said.

The draft resolution, shared with the statesman, recognized the Second Amendment and the Idaho Constitution, which states that hunting is “a valuable part of the patrimony of the State of Idaho and shall be preserved forever for the people”.

He pointed out that people who want to get a hunting license in the state must complete a hunter education and safety course, noted that the Idaho code does not address “responsible access and safe storage of firearms” in places where young people under the age of 18 may be, and included statistics on people who have committed suicide with a firearm.

The Idaho Violent Death Reporting System reported that among people who died by suicide in Idaho between 2014 and 2020, approximately 61% used a firearm. Idaho consistently ranks in the top 10 US states for suicide deaths, according to the Centers for Disease Control and Prevention.

“The Idaho Legislature encourages Idaho residents and institutions to continue to educate, promote, and implement safety precautions for firearm access and storage,” the draft says. of resolution.

Students met with more than a dozen lawmakers on the resolution

While working on the resolution, the student group gained support from more than 100 students across the state, who added their names to sponsor the resolution. They said they met with more than a dozen lawmakers, Democrats and Republicans, many of whom were enthusiastic about their ideas.

“The resounding response we received from most senators was, ‘That’s great. It’s great,” said Kate Stevens, a Boise High School student who led the effort.

But some lawmakers worried about linking suicide to guns and feared the resolution could lead to new legislation restricting access to guns, the students said. Lawmakers have also balked over the clause encouraging the safe storage of firearms.

The National Rifle Association said on its website that it offers “a variety of programs and services to promote the safe handling, use, and storage of firearms.” He recommends people store firearms so that they are not accessible to unauthorized persons.

The students wanted the resolution presented to the Senate State Affairs Committee. The students said they spoke several times with Senator Patti Anne Lodge, who chairs the committee. They said she was supportive from the start, but expressed concerns about parts of the resolution. Lodge did not respond to a request for comment.

Wintrow said the NRA didn’t like the resolution’s language.

“These students just wanted a tiny little corner of their government,” she said. “I think when they see some of the other bills allowed to be printed and tabled, it’s hard to (understand) why this very simple resolution that doesn’t even have the force of law can’t be considered.”

Stevens said lawmakers should be open to hearing the facts and ways that would help make access to guns safer and reduce deaths. No one is interested in taking away anyone’s rights, she said.

“It seems very simple,” Stevens said. “And it’s frustrating that it’s been portrayed as a problem that it’s not.”

Students said they felt some lawmakers were out of touch with the issues they were raising. Simon Richardson, a Boise High student, said most of them had someone in their life who had attempted suicide or died.

Last year, a sixth-grade girl at a college in Rigby injured three people in a shooting. The girl had a handgun in her backpack and fired several bullets before a teacher disarmed her. No one died.

The shooting appears to be the second shooting at an Idaho school that has resulted in an injury. In 1999, a 15-year-old boy fired two gunshots inside Notus Junior-Senior High School, according to The Associated Press. A student was injured by a ricocheting shell.

“We’re all scared to go to school,” Richardson told the Statesman. “I don’t think there are many students at any of our schools who aren’t afraid of a shooting at a very real and potential school.”

Stevens said she was grateful every day that none of them had access to guns. While her grandfather had a handgun for a while, her parents demanded that he get rid of it so she and her brother wouldn’t be in the house with a gun, he said. she declared.

“You don’t realize what you have until you almost lose it,” she said. “As a student, you hear about it every day. We are so numb that we laugh. Because if we don’t, we cry.

Richardson remembers when he was in elementary school, his school was closed because there was a man outside with a gun. He remembers that when he was 8 years old, he was crying in the school library and hiding behind a rocking chair, fearing that the man would enter the school.

“Not a day goes by that none of that comes to mind, like a suicide, a school shooting, a mass shooting, none of that. Each day. Every day it comes to my mind and it’s like, why am I living with this? I’m 17,” Clayton said.

The students said they still didn’t know where to go from here. They feel like they are on the verge of getting a resolution and bringing more attention to this issue, and nothing has come of it.

He said he didn’t feel heard and couldn’t understand why no action was being taken. But the students said they plan to continue their work – to raise awareness of the issue, try to stop gun deaths and provide support for survivors of gun violence.

“We say to ourselves, what do we do now? We have tried everything with the Legislative Assembly. It’s a growing problem, and it feels like they’re just ignoring it,” Richardson said. “And it will only get worse.”