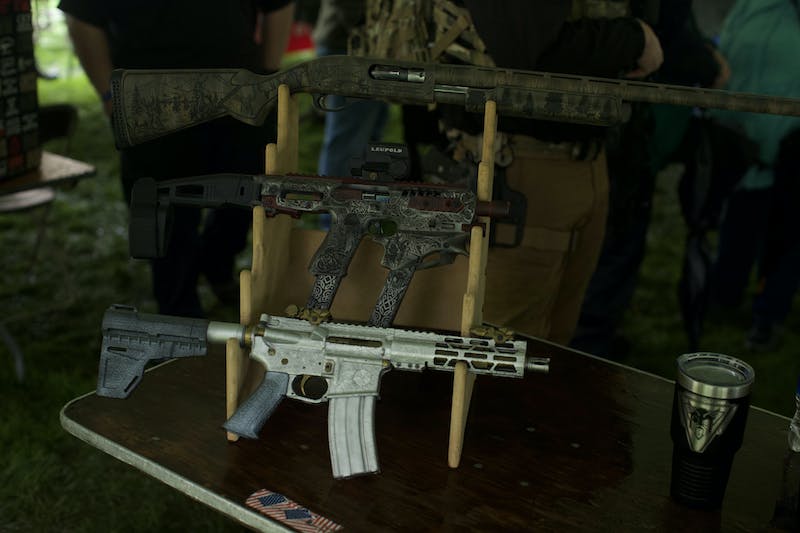 The bills, if enacted, would make it illegal to sell or possess an ammunition magazine capable of holding more than 10 bullets. Exceptions are made for the police, serving military personnel, and those who have a large capacity magazine purchased before the law came into force and reported their ownership to local authorities.

The bills would also criminalize possession of these magazines as an offense of up to 90 days in jail or a $ 500 fine. Repeat offenses would be treated as a felony punishable by imprisonment for up to two years or a fine of $ 5,000. The measures would enter into force on January 1, 2023, if enacted.

The Oxford High School shooting on November 30, 2021, allegedly carried out by a 15-year-old student, was carried out with a handgun containing a 15-round magazine. Law enforcement said the gunman took two magazines with him.

Michigan House Democrats have said the measures will prevent even more serious tragedies in the future.

Representatives Brenda Carter, D-Pontiac, and Cynthia Johnson, D-Detroit, were presented as leaders on the bills. In an interview, Carter discussed the thought process behind these measures.

“We thought if we limited the capacity of magazines they should take a minute to rethink and reload, and in doing so, that might give people a chance to escape… maybe to safety,” a- she declared. “We need to be able to look at what’s going on not just in Michigan, but across the country and realize that sane gun violence laws – not trying to get anyone’s guns out.” , but actually trying to get the guns out of the hands of what we call bad actors – that’s what we hope to reach across the aisle with our colleagues and say, “Yeah, we can put something in it. We can come to a compromise and we can ensure the security of our state and our nation.

“What are the weapons for? They’re supposed to kill – kill who, what? I can understand if you’re going to hunt. But it’s almost like human beings are going to hunt other human beings, ”said Johnson, a major sponsor of one of the two House bills. “Why do you need a pistol that contains more than 10 bullets?” “

“We need responsible lawmakers so as not to put the lives of human beings at risk – to turn them into political pawns. I know guns don’t kill people. I know that. But we must do something to limit the number of people who die as a result of gun violence, ”she added.

Several other sponsors of these bills were able to discuss their thoughts on the measures.

“This is a common sense step that would have been effective in impacting the most recent tragedy, and something which, in my opinion, is an important part of common sense control aimed at reducing tragic loss of life. due to gun violence here in Michigan. “said Julie Brixie, D-Okemos.

Brixie was one of many representatives to point out that no gun control bill proposed by Democrats has even been heard by the state legislature since 2010.

“I hope my common sense colleagues who recognize that this escalation of gun violence that continues to occur in our state is something that we have the capacity to influence,” Brixie said.

“We want to protect lives, and part of protecting lives is enacting laws that will help get guns out of the hands of people who shouldn’t have them, who have mental health issues or have other tendencies to kill. violence. Why put a killing machine in their hands? Said Padma Kuppa, D-Troy, another sponsor of these bills.

Measures regarding magazine capacity will likely be subject to close scrutiny by the State House and the State Senate, both controlled by the Republican Party. However, with narrow margins of control and national outrage surrounding the recent Oxford high school shooting, the bills could see a path to adoption.

Senate Majority Leader Mike Shirkey R-Clarklake said MLive the day after the shooting and before these specific measures are proposed that “if we become obsessed with eliminating all risks, then we will develop and evolve into a country that we will not recognize because we will not have no more freedom. It’s a balance.

On the possibility of passing the bills despite likely Republican opposition, Carter said she was hopeful.

“We could sit down and discuss the differences and maybe come up with some sort of resolution that would be acceptable to both sides,” she said.

Carter said that in discussing the measures with some of her Republican voters, she found reasonable gun ownership to be a two-party ideal.

Do you want the news without having to search for it?
Sign up for our morning newsletter. It’s everything your friends are talking about and more. And it’s free!

Representative Kelly Breen, D-Novi, is another sponsor of these pieces of legislation.

“My general thought is that whatever Republicans try to do unilaterally, even if they push it into both houses, which they control, the governor would likely veto,” Breen said. “All Democratic packages are all Democrats, and it’s unlikely that this will even be heard. So you are at a dead end there.

“The only way we are going to have an impact on the fight against gun violence as a whole is in a bipartisan way,” she added. “And with that, I start by assuming that no one likes it. No one is happy. Everyone is appalled. Everyone is upset. And we all love this country. And if we can get from this place, we can find a way.

“I don’t know what makes him a Democrat or a Republican because what we’re really looking for is to save lives,” Kuppa said. “I don’t think any party has the right to save lives, so I think we should all work together to save lives.”

Michigan House Democrats introduced the bills as well as other previously introduced bills that they said would bolster gun safety in the state, including measures requiring universal background checks. all gun sales, banning guns in Michigan Capitol buildings, banning convicted domestic abusers from owning guns. for eight years after conviction and increase access to safe methods of storing firearms.

Representative Rachel Hood, D-Grand Rapids, discussed her support for these measures and her own bill that would establish a seven-day waiting period for all pistol sales in the state.

“Data across the country indicates that waiting periods for pistol sales create a buffer that reduces the rate of impulsive acts of gun violence,” Hood said. “These waiting periods have been shown to reduce suicide rates by 7-11% and reduce firearm homicides by 17%.

Hood said a “waiting period” might be needed to facilitate the change.

“While not a completely safe solution in the case of the Oxford school shooting, it may have given school environment professionals more time to work with students. parents and work with the shooter to prevent the event, ”she said.

Hood refers to the tight timeline in which the alleged shooter’s weapon was obtained – the weapon was purchased on Black Friday, just four days before the shooting on Tuesday, November 30, 2021.

Hood’s legislation has yet to be formally introduced to the House.

Louisiana heads to market after dropping underwriter for gun policy