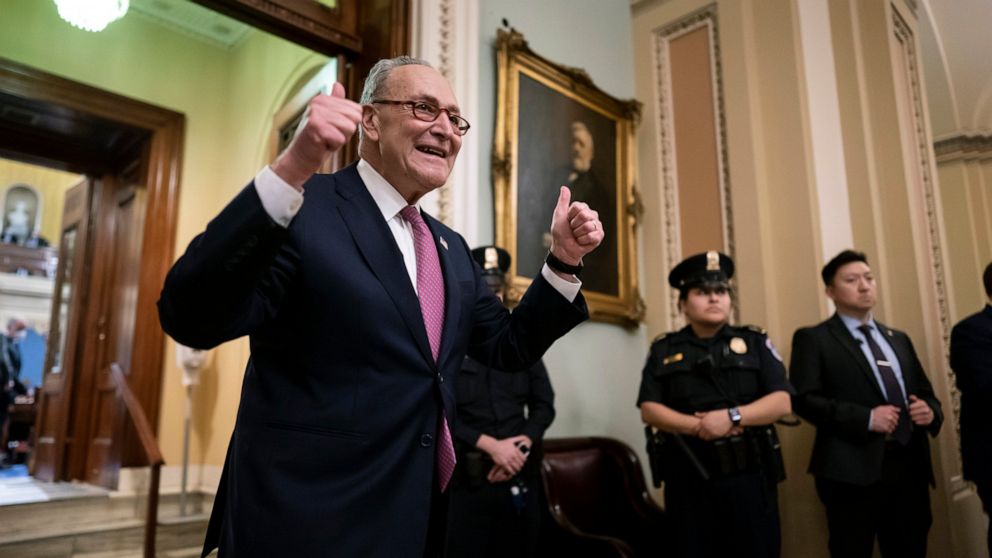 NEW YORK — Democrats have spent years pledging to address gun violence plaguing communities across the United States. But a spate of mass shootings over the weekend that left dozens injured and two dead was a reminder of how little they have accomplished since taking control of Washington 15 months ago.

The struggle for the Biden administration and Democrats in Congress to enact meaningful legislation to improve gun safety reflects how frustrated the party’s ambitious agenda has been frustrated by infighting, the lingering pandemic and war. in Ukraine. Near complete Republican opposition to Democratic priorities, including gun rules, has stymied a party with wafer-thin majorities in the House and Senate.

But that’s little comfort for gun safety advocates and the tens of thousands of shooting victims who have been told Democrats would reduce gun violence if given the chance to govern. In an already tough election year, inaction threatens to further undermine the coalition of young people, women, voters of color and independents who helped secure Joe Biden’s presidency in 2020 and will be again. necessary if the Democrats are to take control of Congress.

“I’m just angry,” said David Hogg, a gun safety activist who survived the 2018 shooting that killed 17 people at Marjory Stoneman Douglas High School in Parkland, Florida. “We took the House, then we took the Senate and now we also have the White House, and still, nothing changes.”

Rep. Lucy McBath, D-Ga., whose son was shot nearly a decade ago, encouraged those frustrated with the pace of progress to be patient. She compared the fight to reduce gun violence to her parents’ fight for civil rights a generation earlier.

“Change is not happening as quickly as we would like. Because understand, it’s a culture we have to change,” McBath said in an interview. “I know we are making real progress on this issue. The fact that I’m actually in Washington and was elected in Georgia with a political agenda on gun violence…tells you that there’s progress.

Still, McBath’s return to Congress next year is far from certain. She’s locked in a competitive primary against Rep. Carolyn Bourdeaux in a redesigned neighborhood in Atlanta’s northeast suburbs.

Meanwhile, White House aides insist Biden is doing everything he can to keep the issue of gun violence front and center.

Just last week, the Democratic president signed an executive order to crack down on untraceable “ghost weapons.” He also dedicated part of his first State of the Union address to gun violence and called for major increases in police funding in his 2023 budget proposal.

But some of those same progressives who have applauded the president’s efforts insist he and his party aren’t doing enough.

“It’s appalling, it’s horrifying, it’s so sad and embarrassing that it will only continue and get worse,” said Mark Barden, whose 7-year-old son Daniel was among 26 students and educators killed. during a shootout in Sandy Hook. Primary school in 2012.

Barden is now co-founder and CEO of Sandy Hook Promise Action Fund, one of several gun violence prevention groups that has emerged over the past decade to help counter the influence of the gun lobby on the politics and politics.

“Congress needs to step up and get to work,” Barden said, noting that this December marks the 10th anniversary of the murder of his freshman son.

Democrats’ frustration around gun violence prevention is not new.

After the Sandy Hook shootings, President Barack Obama tried unsuccessfully to convince Congress to pass popular gun safety measures, such as universal background checks and a ban on assault weapons.

There are few signs now that the Democrats who control Congress will send gun safety measures to Biden’s office soon.

The House passed legislation last year to expand background checks to include private and online sales, including at gun shows. But Senate Democratic leaders have yet to schedule their version of the legislation for a vote. And facing near-unanimous GOP opposition, Democrats would need the support of at least 10 Republicans in a 50-50 Senate to overcome any filibusters.

Sen. Chris Murphy, D-Conn., attempted to introduce the background check bill for a vote in the Senate in December, but that effort fell through when Republicans objected. Democratic Sen. Joe Manchin of West Virginia also opposes the House bill.

When asked if Senate Majority Leader Chuck Schumer would bring gun safety legislation to a vote, an aide pointed to the New York Democrat’s comments in February.

“Sen. Murphy had tried to work with the Republicans to get 60 votes. He didn’t give up on those efforts, although they didn’t go that far. But we’ll continue to do background checks. I’m a big believer in that. , very strong,” Schumer said at the time.

Meanwhile, more Americans are dying from gun-related injuries than ever before.

In 2020, the most recent year for which federal data is available, 19,384 people were killed in firearm homicides – a 35% increase from the previous year and the largest increase on a year of ever recorded firearm homicides.

Republicans have overwhelmingly opposed gun control measures, calling any toughening of the current law a threat to the constitutionally protected right to bear arms. The GOP has instead called for stronger policing and more gun ownership to tackle the spike in crime.

At the same time, Republicans have seized on the surge in violent crime under the broad umbrella of public safety as a corner issue to reshape how voters view gun violence. Republicans fared well in Virginia, New York, New Jersey and Pennsylvania in last fall’s elections with public safety as one of their top talking points.

And the gun lobby is confident that public safety concerns will help its Republican allies retake the House, if not the Senate, this fall.

“We see a lot of opportunity” as we approach the midpoints, National Rifle Association spokesman Andrew Arulanandam said. “Whether the gun control lobby realizes it or not, there is a heightened appreciation and awareness in this country that gun control does not make people safer.”

The NRA has already celebrated resounding successes at the state level in its efforts to allow people to carry concealed weapons without a permit. Republican lawmakers in nine states have enacted such laws since Democrats took office in Washington in 2021. Overall, 25 states no longer require gun owners to have a license to carry a gun. concealed in public.

Guns remain an incredibly contentious issue in American politics, though polls suggest the issue has been overshadowed in the past year by other events.

In an AP-NORC poll last December, 24% named gun laws in an open-ended question as one of the top five issues the government should work on in 2022. This ranked below other issues, like the economy, COVID-19, and even immigration, but the percentage prioritizing gun laws for 2022 has risen from 5% for 2021 to 12% for 2020. The poll was conducted the weekend after a shooting at Oxford High School in Michigan left four dead and seven injured.

Forty-one percent of Democrats have named gun laws a government priority in 2022, compared to just 6% of Republicans.

Meanwhile, gun safety groups like March For Our Lives are pressuring Democrats to act. The group is backing primary challenges this spring and summer for the first time to Democratic incumbents who haven’t prioritized the issue.

On Tuesday, Hogg and other March For Our Lives youth activists dropped body bags outside Schumer’s New York office to protest his reluctance to bring gun safety legislation to the Senate for a vote.