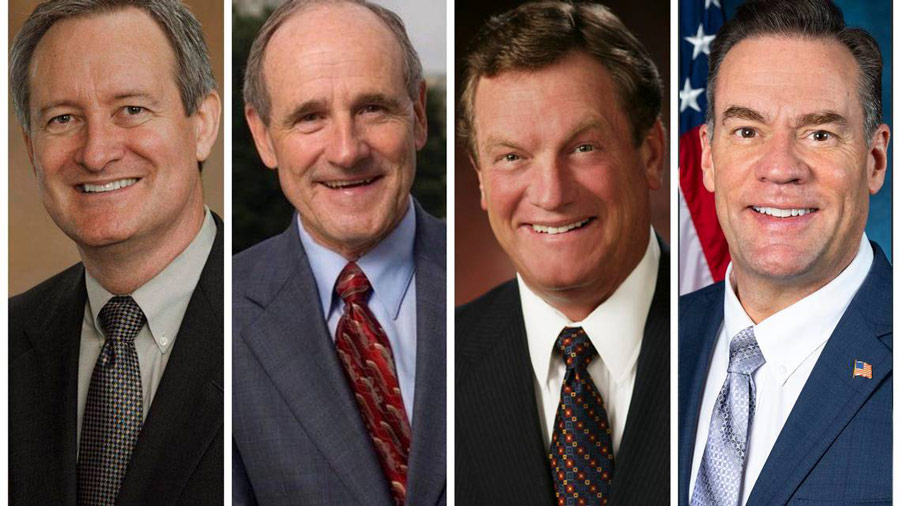 On Thursday night, Senators Mike Crapo and Jim Risch joined 31 Senate Republicans to vote against the landmark bill titled the bipartisan Safer Communities Act. The bill, co-sponsored by two Democrats and two Republicans in the Senate, passed the upper house by a 65-33 vote.

The United States House followed the Senate passage with approval by a vote of 243 to 193 on Friday. Idaho Reps. Mike Simpson and Russ Fulcher, both Republicans, opposed the bill.

The 50 Democrats in the Senate were joined by 15 Republicans, including Senate Minority Leader Mitch McConnell, R-Kentucky, approving the measure. In the House, 14 Republicans backed the bill to send it to Democratic President Joe Biden’s desk. He signed the law into law on Saturday morning, making it the first major piece of gun legislation since the decade-long assault weapons ban passed in 1994 under former Democratic President Bill Clinton.

“Time is running out,” Biden said in remarks from the White House on Saturday. “While this bill doesn’t do everything I want, it does include actions that I’ve long called for that will save lives.”

Among several key elements, the new legislation created from a compromise includes hundreds of millions of federal dollars to encourage states to enact “red flag laws.” Such restrictions allow law enforcement to seek approval from judges to temporarily remove firearms from people deemed a danger to others or themselves. Federal funds from the bill can also be used by states to expand mental health resources, including crisis intervention programs, and to enhance safety in schools, where several high-profile acts of gun violence media events have taken place across the country.

Risch, 79, in office since 2009, was unavailable for an interview after the vote because he left on an international flight, according to his Senate spokesman. But in a written statement Thursday, Risch argued that legislation “infringing on the constitutional rights of Americans is not the answer to the challenges before us.”

“The weak due process protections of this bill and its provisions aimed at funneling federal taxpayers’ money into facilitating state-level gun forfeiture orders – the so-called ‘red flag laws’ “- will erode citizens’ Second Amendment rights,” Risch said. “Violent crime has no place in our communities, and we must continue to work toward solutions that keep schools and communities safe while respecting the rights of the American people.”

Crapo, 71, is currently run for a fifth term after nearly two dozen years at his seat. For three days before and after Thursday’s vote, the Idaho statesman repeatedly requested an interview through Crapo’s publicist, Marissa Morrison Hyer. On Friday, she said he was unavailable for an interview and directed a reporter to a written statement posted on his Senate website the same day.

In the statement, Crapo cited the need to improve shortcomings in the country’s mental health system, which he said are often a contributing factor to “heinous acts of gun violence,” but dismissed what he called federal override built into the bill. red flag laws in states like Idaho, which don’t already have them on the books.

“These policies, which expand access to essential care by supporting telehealth options and creating more service sites, are the kinds of bipartisan and targeted solutions that address the root causes of gun violence,” said Crap. “However, I have serious concerns about the use of federal funds to help states establish ‘red flag laws.’”

Scott Oh Cleveland, 60, of Eagle, is running as an independent against Crapo for the US Senate. Like the current incumbent, Oh Cleveland told the Statesman that he also opposes the gun safety bill, largely based on what he called the “lack of due process” which could give law enforcement the ability to revoke a person’s right to own a gun if they are deemed dangerous.

The federal bill was crafted following a series of shocking mass shootings, including one last month at an elementary school in Uvalde, Texas. There, an 18-year-old gunman – who had purchased two high-powered rifles and hundreds of cartridges days earlier – killed 19 students and two teachers and injured 17 others, before turning the gun on himself . Before the tragedy – now the deadliest school shooting in Texas – the teenage shooter also seriously injured his grandmother when he shot her in the face.

David Roth, 40, a Democrat from Idaho Falls, is also running against Crapo in the November general election. He said he supports the National Gun Safety Bill and challenged the incumbent senator to justify his opposition vote.

“There’s no excuse to vote against it,” Roth told the Statesman in a phone interview. “There is nothing in this bill that will infringe on rights to the point of outweighing the potential good it could do. I cannot understand why even the basic things advocated in this bill that Senator Crapo would oppose them.

In addition to emphasizing red flag laws, the legislation closes the so-called “boyfriend loophole” by further prohibiting who can own a gun if they have a previous conviction of domestic violence against any person with whom he has an intimate or romantic relationship. The previous iteration of the restriction did not contemplate the firearms owner’s personal relationships beyond the individual’s spouse or persons for whom they share children or a household.

To expand criminal background checks for people ages 18 to 21 when trying to buy a gun, the bill also outlines, through grants, that states include reviewing records of minors. in the national database. The legislation also makes it easier to prosecute people who buy guns for those who are not licensed to own them and requires people who sell guns as a primary source of income to register with the federal government as authorized resellers.

Among many other supporters, the bill received support from the Major Cities Chiefs Association, an organization made up of police executives from the largest cities in the United States and Canada. Membership requires a metropolitan population of at least 1.5 million people and whose largest law enforcement agency includes at least 1,000 sworn officers.

“The MCCA has long been an advocate of reasonable firearms policy,” said the organization support letter, signed by Phoenix Police Chief Jeri Williams, who also serves as the group’s chairman. “The MCCA strongly believes that the bipartisan Safer Communities Act will help save lives.”

The association’s membership requirements preclude Boise from being a part of it. The city has about 460,000 residents in its metropolitan area, and the city police have about 300 sworn officers. The Boise Police Department declined to take a position on the bill, but an agency spokesperson told the Statesman that Boise police “appreciate that Congress is considering the matter and its impact on public safety. “.

Simpson, 71, a candidate for his 13th term after taking office in 1999 to represent Idaho’s 2nd congressional district, was tied to budget meetings and unavailable for an interview on Friday, a spokesperson said. In a written statement released after the House vote, Simpson said he supported the mental health elements of the bill, but shared concerns about the inclusion of “unacceptable language aimed at diminishing the rights of law-abiding citizens under the Second Amendment”.

“I’m particularly concerned about provisions that pave the way for universal background checks and create waiting periods for some adults to purchase firearms,” ​​Simpson said.

Congressional staffers for Fulcher, 60, who is seeking a third term to represent Idaho’s 1st congressional district, did not respond to interview requests from the statesman for three days. Neither did Fulcher’s campaign.

Instead, Fulcher released a brief statement via social media Friday after the vote, calling the bill the “Senate Gun Control Act” and saying it “restricts Americans’ due process rights and excludes law-abiding citizens under the age of 21 for additional restrictions.”

Fulcher and Simpson’s respective Democratic rivals have each previously called on their opponents to support gun safety legislation like the bill that was approved by Congress on Friday.

Like Crapo and most Republicans, Fulchers and Simpsons are endorsed in their election year races by the National Rifle Association, which has publicly opposed the gun safety bill. Risch is not eligible for re-election until 2026 – if he decides to run again at 83 – but he was NRA approved in 2020.

Last year, Idaho Governor Brad Little signed a bill that has hampered enforcement statewide in response to multiple Biden executive actions involving firearms, their accessories and ammunition that conflict with the Idaho Constitution. In March 2021, the president issued guidelines to limit the production of so-called “ghost guns,” which are firearms built at home with unregistered components, as well as to create a standardized model for states to use. red flag laws.

After the gun safety bill passed on Friday, a spokesperson for Little, 68, told the statesman that the Republican governor was “continuing conversations with our federal delegation on the legislation and remained a strong supporter of Americans’ Second Amendment rights and safe communities.” Little is endorsed by the NRA in his bid for a second term in November.

Boise Mayor Lauren McLean, 47, a Democrat, did not take a position on the bill. The Boise City Council, however, has for consideration in its Tuesday agenda a resolution that commits the city to “common sense gun safety efforts,” according to the city council’s agenda.